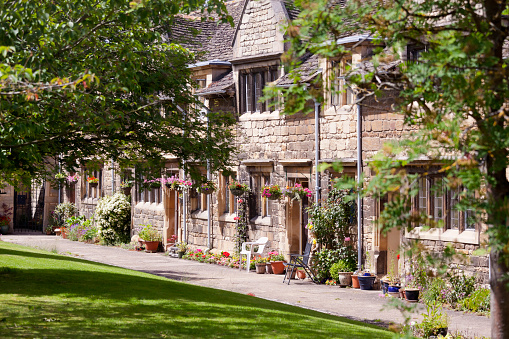 The Burghley Almshouses at Stamford Lincolnshire in the UK. Lord Burghley's Hospital was founded in 1597. It is on the site of the Medieval Hospital of St John the Baptist and St Thomas the Martyr. The medieval hospital had been founded around 1174 and confirmed in 1190 under Peterborough Abbey for the use of pilgrims and the poor. It had apparently fallen into disuse by the 16th century when only the chapel continued in use. It was bought in 1549 by William Cecil and was maintained as an almshouse by 1595. It was officially endowed by Lord Burghley in 1597 when it was to house 13 old men, one of whom was to serve as warden. The buildings are built with local Barnack limestone.