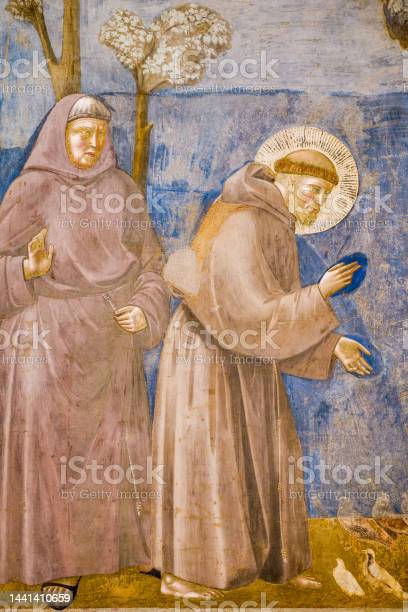 Download this A Detail Of The Frescos Painted By Giotto Inside The Basilica Di San Francesco In The Medieval Town Of Assisi photo now. And search more of iStock's library of royalty-free stock images that features Religious Saint photos available for quick and easy download.Product #:gm1441410659$33.00iStockIn stock
Images
Only from iStock

The detail of the figure of Saint Francis in one of the magnificent frescoes painted by Giotto inside the Basilica Superiore di San Francesco (Upper Basilica of Saint Francis), in the medieval heart of Assisi, in Umbria. Giotto painted a series of great frescoes along the walls of the single nave of the Basilica between 1292 and 1305, depicting the Stories of St. Francis, from his vocation to his death. Built in the Italian Gothic style starting from 1228 and completed in 1253, the Basilica, which preserves the mortal remains of the Saint of the Poor from 1230, is composed of the Basilica Inferiore (Lower Basilica) and the Basilica Superiore (Upper Basilica), perfectly integrated. Over the centuries Assisi and the spirituality of its sacred places have become a symbol of peace, a point of reference for tolerance and solidarity between peoples and between the different confessions of the world. The Umbria region, considered the green lung of Italy for its wooded mountains, is characterized by a perfect integration between nature and the presence of man, in a context of environmental sustainability and healthy life. In addition to its immense artistic and historical heritage, Umbria is famous for its food and wine production and for the high quality of the olive oil produced in these lands. Since 2000 the Basilica and other Franciscan sites of Assisi have been declared a World Heritage Site by UNESCO. Image in high definition format. What's a royalty-free license?
Royalty-free licenses let you pay once to use copyrighted images and video clips in personal and commercial projects on an ongoing basis without requiring additional payments each time you use that content. It's a win-win, and it's why everything on iStock is only available royalty-free — including all Religious Saint images and footage.
What kinds of royalty-free files are available on iStock?
Royalty-free licenses are the best option for anyone who needs to use stock images commercially, which is why every file on iStock — whether it’s a photo, illustration or video clip — is only available royalty-free.
How can you use royalty-free images and video clips?
From social media ads to billboards, PowerPoint presentations to feature films, you're free to modify, resize and customize every asset on iStock — including all Religious Saint images and footage — to fit your projects. With the exception of "Editorial use only" photos (which can only be used in editorial projects and can't be modified), the possibilities are limitless.