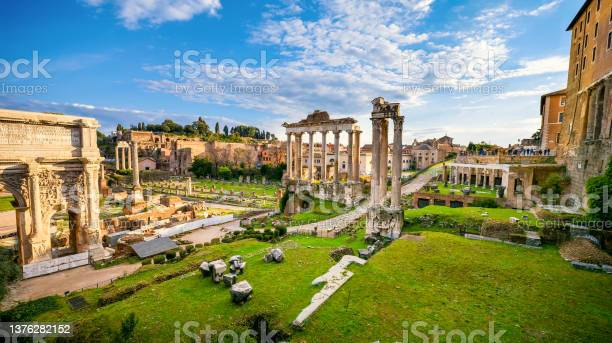 Download this A Suggestive View Of The Imperial Roman Forum In The Historic Core Of Ancient Rome photo now. And search more of iStock's library of royalty-free stock images that features Roman Forum photos available for quick and easy download.Product #:gm1376282152$33.00iStockIn stock
Images
Only from iStock

A suggestive wide angle view of the Imperial Roman Forum, in the historic core of Rome, in a detailed image taken from the viewpoint of the Capitoline Hill. On the left a portion of the imposing triumphal arch of Septimius Severus, while in the center the remains of the Temple of Saturn and the Basilica Julia. On the right the base of the Capitoline hill and the mighty walls of the Roman Capitol (Campidoglio). Built in white marble in 203 AD to commemorate the victories of the emperor Septimius Severus in the Parthian war, it is one of the best preserved triumphal arches of ancient imperial Rome. The Temple of Saturn was initially built by Tarquinius Superbus during the reign of Rome in 497 BC and completed in its present form in 360 AD. According to Roman mythology, Saturn was a deity associated with wealth. In his temple was initially kept the named Aerarium, or the gold and silver reserves of the Roman Republic. After the transfer of the Aerarium to another place, the Temple of Saturn was kept as a place of worship. The Imperial Roman Forum, one of the largest archaeological areas in the world, represented the political, legal, religious and economic center of the city of Rome, as well as the nerve center of the entire Roman civilization. In 1980 the historic center of Rome was declared a World Heritage Site by Unesco. Super wide angle image in 16:9 and high definition format.