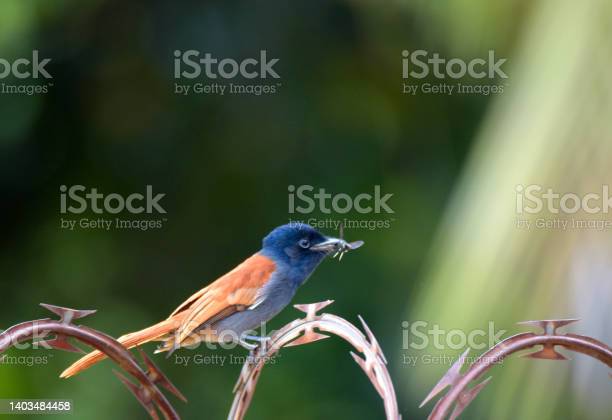 The African paradise flycatcher (Terpsiphone viridis) is a medium-sized passerine bird. The two central tail feathers of the male are extended into streamers that commonly are more than twice as long as the body. The female tail feathers are of moderate length and without streamers. The upper parts of the male body, wings, and tail are boldly coloured in chestnut or rusty shades, but the underparts and the head are variably grey to blue-gray, with the head of the mature male being darker, commonly glossy black with greenish highlights. The beak and other bare areas, including a wattle ring round the eye, match the colour of the surrounding feathers. The female coloration is similar, though not so showy and glossy and with the head paler. The African paradise flycatcher feeds mainly on insects. It builds a neat cup nest in which it lays a clutch, usually of two or three eggs. It generally inhabits open forest and savanna, and is a locally common resident breeder in Africa south of the Sahara. The International Union for Conservation of Nature has listed it as being of "least concern".