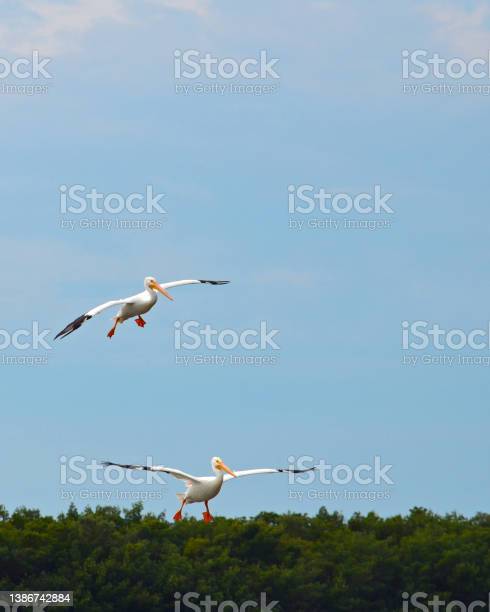 There are at least fifty types of shorebird species in North America and are found throughout North America and most of them can be seen along the water's edge of our lands. Some prefer salt water and some fresh water, depending on the season. The American white Pelican is one of the largest birds in North American with a 9-foot wingspan. The plumage is almost entirely bright white, except the black primary and secondary quills, which are hardly visible except in flight. The bill is huge and flat on the top, with a large throat sac below. In the breeding season, its bill is vivid orange in color and a laterally flattened "horn" on the upper bill. The horn is shed after the birds have mated and laid their eggs. Immature birds have light grey plumage with darker brownish nape and quills. The American White Pelican is similar to Brown Pelican in shape but much larger and very different in habits. It lives far inland, feeds cooperatively in shallow lakes and does not dive from the air for fish. On the water it dips its pouched bill to scoop up fish, or tip-up like an oversized dabbling duck. It uses its pouch to scoop up food but swallow its catch before flying off. Other animals eaten by these birds are crayfish and amphibians. Sometimes, a group of pelicans would work together to herd fish into the shallows for easy feeding. Pelicans are skillful food thieves. They steal from other pelicans trying to swallow large fish and are successful about one-third of the time.

What's a royalty-free license?
Royalty-free licenses let you pay once to use copyrighted images and video clips in personal and commercial projects on an ongoing basis without requiring additional payments each time you use that content. It's a win-win, and it's why everything on iStock is only available royalty-free — including all American White Pelican images and footage.
What kinds of royalty-free files are available on iStock?
Royalty-free licenses are the best option for anyone who needs to use stock images commercially, which is why every file on iStock — whether it’s a photo, illustration or video clip — is only available royalty-free.
How can you use royalty-free images and video clips?
From social media ads to billboards, PowerPoint presentations to feature films, you're free to modify, resize and customize every asset on iStock — including all American White Pelican images and footage — to fit your projects. With the exception of "Editorial use only" photos (which can only be used in editorial projects and can't be modified), the possibilities are limitless.