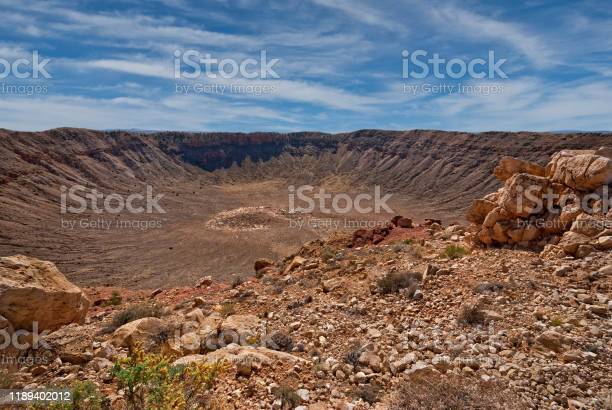 The Arizona Meteor Crater (Barringer Meteorite Crater) formed 50,000 years ago when an asteroid plunged through the Earth’s atmosphere and crashed into what is now central Arizona. This area was not populated by humans at the time. Because of Arizona’s dry climate and the crater’s relatively young age, Meteor Crater is the best preserved impact crater on Earth. The small asteroid was just 150 feet across. Traveling at around 8 miles per second the force of the impact was tremendous. In just a few seconds the crater was formed when millions of tons of rock were thrown out. Today Meteor Crater is a famous tourist attraction with a museum featuring displays about the history of the crater. Scientist from all over the world come to Meteor Crater to study it. Meteor Crater is near Winslow, Arizona, USA.