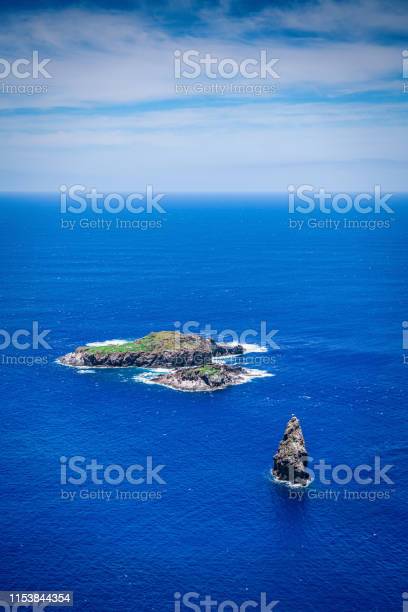 View from Orongo Stone Village towards Motu Nui, with the smaller Motu Iti and the sea stack of Motu Kao Kao. Motu Nui, large island in the Rapa Nui language, is the largest of the three islets south of Easter Island and is the most westerly place in Chile. All three islets have seabirds but Motu Nui was also an essential location for the Tangata manu Bird Man Cult which was the island religion between the moai era and the Christian era. Motu Nui is the summit of a large volcanic mountain which rises over 2,000 meters from the sea bed. The ritual of the "Bird Man" cult was a competition to collect the first egg of the manutara. This took place starting from Motu Nui where the Hopu waited for the sooty terns to lay their first eggs of the season. The Hopu who seized the first egg raced to swim back to Easter Island, climbed the cliffs to Orongo and presented the egg to their sponsor in front of the judges at Orongo. This gave their sponsor the title of Tangata manu and great power on the island for a year. Many Hopu were killed by sharks or by falling. The winning clan gained certain rights including the collecting of eggs and young birds from the islets. Bird Cult Island, Motu Nui, Easter Island, Chile. What's a royalty-free license?
Royalty-free licenses let you pay once to use copyrighted images and video clips in personal and commercial projects on an ongoing basis without requiring additional payments each time you use that content. It's a win-win, and it's why everything on iStock is only available royalty-free — including all Rapa Nui images and footage.
What kinds of royalty-free files are available on iStock?
Royalty-free licenses are the best option for anyone who needs to use stock images commercially, which is why every file on iStock — whether it’s a photo, illustration or video clip — is only available royalty-free.
How can you use royalty-free images and video clips?
From social media ads to billboards, PowerPoint presentations to feature films, you're free to modify, resize and customize every asset on iStock — including all Rapa Nui images and footage — to fit your projects. With the exception of "Editorial use only" photos (which can only be used in editorial projects and can't be modified), the possibilities are limitless.