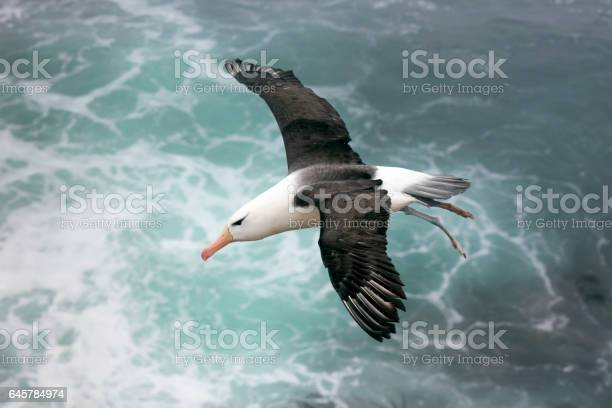 Download this Blackbrowed Albatross Above The Sea On The Falkland Islands photo now. And search more of iStock's library of royalty-free stock images that features Albatross photos available for quick and easy download.Product #:gm645784974$33.00iStockIn stock
Images
Only from iStock

The Black-browed Albatross (Thalassarche melanophris) is a large seabird that breeds on 12 circumpolar islands in the southern oceans. The largest colony, with over 400,000, is on the Falkland Islands. Despite having a total population of over 1.2 million, ongoing declines in their numbers have led to their categorization as Near Threatened on the IUCN Red List. They do not breed until they are 10 years old, but beginning in their third and fourth year they return to their breeding grounds to practice their elaborate courtship rituals. They raise only one chick at a time. What's a royalty-free license?
Royalty-free licenses let you pay once to use copyrighted images and video clips in personal and commercial projects on an ongoing basis without requiring additional payments each time you use that content. It's a win-win, and it's why everything on iStock is only available royalty-free — including all Albatross images and footage.
What kinds of royalty-free files are available on iStock?
Royalty-free licenses are the best option for anyone who needs to use stock images commercially, which is why every file on iStock — whether it’s a photo, illustration or video clip — is only available royalty-free.
How can you use royalty-free images and video clips?
From social media ads to billboards, PowerPoint presentations to feature films, you're free to modify, resize and customize every asset on iStock — including all Albatross images and footage — to fit your projects. With the exception of "Editorial use only" photos (which can only be used in editorial projects and can't be modified), the possibilities are limitless.