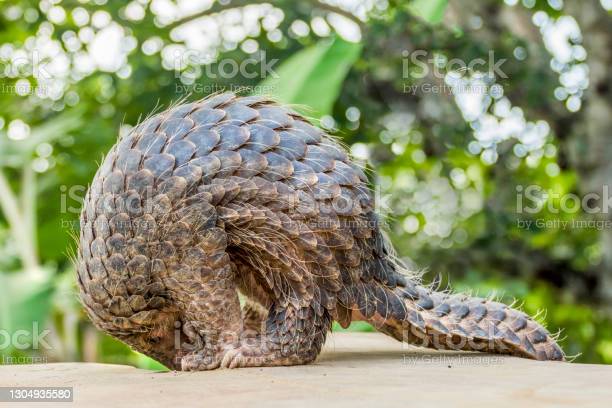 Download this Closeup Of A Pangolin Curled Up On A Wall Indonesia photo now. And search more of iStock's library of royalty-free stock images that features Pangolin photos available for quick and easy download.Product #:gm1304935580$12.00iStockIn stock
Images

Close-up of a pangolin curled up on a wall, Indonesia stock photo

Eight species of pangolins are found on two continents. They range from Vulnerable to Critically Endangered..Pangolins! These solitary, primarily nocturnal animals, are easily recognized by their full armor of scales. A startled pangolin will cover its head with its front legs, exposing its scales to any potential predator. If touched or grabbed it will roll up completely into a ball, while the sharp scales on the tail can be used to lash out. Also called scaly anteaters because of their preferred diet, pangolins are increasingly victims of illegal wildlife crime—mainly in Asia and in growing amounts in Africa—for their meat and scales. Four species live in Africa: Black-bellied pangolin (Phataginus tetradactyla), White-bellied pangolin (Phataginus tricuspis), Giant Ground pangolin (Smutsia gigantea) and Temminck's Ground pangolin (Smutsia temminckii). The four species found in Asia: Indian pangolin (Manis crassicaudata), Philippine pangolin (Manis culionensis), Sunda pangolin (Manis javanica) and the Chinese pangolin (Manis pentadactyla). All eight pangolin species are protected under national and international laws, and two are listed as Critically Endangered on the IUCN Red List of Threatened Species.