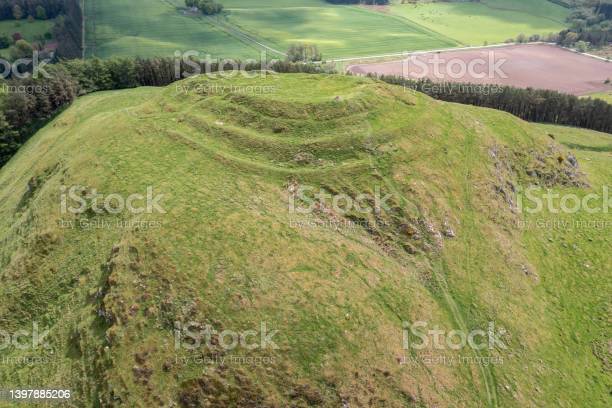 Aerial drone image of atmospheric Dunsinane Hill Fort, also known as Macbeth’s Castle in Perthshire. Traces of human settlement go back a thousand years, defined in the contours of the hill. Once an Iron Age encampment, it was later the site of The Battle of Dunsinane, in 1054, between the English army of Earl Siward, fighting for Prince Malcolm’s claim to the Scottish throne against King Macbeth’s army. Shakespeare later wrote a line in his Macbeth where a supernatural being is quoted as saying "Macbeth shall never vanquished be, until Great Birnam wood to high Dunsinane hill Shall come against him."

What's a royalty-free license?
Royalty-free licenses let you pay once to use copyrighted images and video clips in personal and commercial projects on an ongoing basis without requiring additional payments each time you use that content. It's a win-win, and it's why everything on iStock is only available royalty-free — including all Fort images and footage.
What kinds of royalty-free files are available on iStock?
Royalty-free licenses are the best option for anyone who needs to use stock images commercially, which is why every file on iStock — whether it’s a photo, illustration or video clip — is only available royalty-free.
How can you use royalty-free images and video clips?
From social media ads to billboards, PowerPoint presentations to feature films, you're free to modify, resize and customize every asset on iStock — including all Fort images and footage — to fit your projects. With the exception of "Editorial use only" photos (which can only be used in editorial projects and can't be modified), the possibilities are limitless.