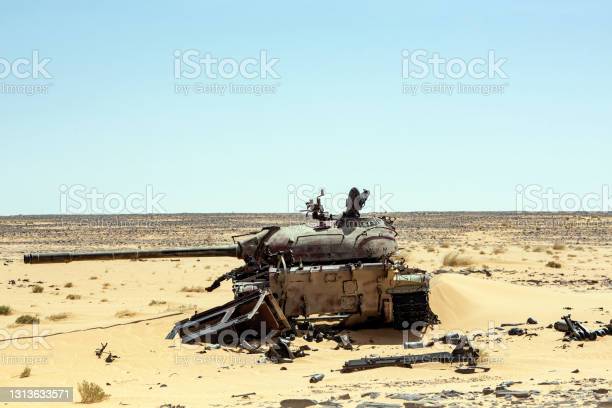 Download this Dunes And Mountains In The Ennedi Massif Sahara Chad photo now. And search more of iStock's library of royalty-free stock images that features Sahel photos available for quick and easy download.Product #:gm1313633571$33.00iStockIn stock
Images
Only from iStock

The remains of destroyed tanks and other war equipment at the Wadi Doum war site in the Sahara, northern Chad, close to the Ennedi massif. The sand dunes now cover much of the old war equipment. This is where the last battles of the war between Chad and its northern neighbor Libya took place in 1986/1987 - in 1987, Chad's army was able to push back Libyan troops in the so-called "Toyota War", thus ending the military conflict. What's a royalty-free license?
Royalty-free licenses let you pay once to use copyrighted images and video clips in personal and commercial projects on an ongoing basis without requiring additional payments each time you use that content. It's a win-win, and it's why everything on iStock is only available royalty-free — including all Sahel images and footage.
What kinds of royalty-free files are available on iStock?
Royalty-free licenses are the best option for anyone who needs to use stock images commercially, which is why every file on iStock — whether it’s a photo, illustration or video clip — is only available royalty-free.
How can you use royalty-free images and video clips?
From social media ads to billboards, PowerPoint presentations to feature films, you're free to modify, resize and customize every asset on iStock — including all Sahel images and footage — to fit your projects. With the exception of "Editorial use only" photos (which can only be used in editorial projects and can't be modified), the possibilities are limitless.