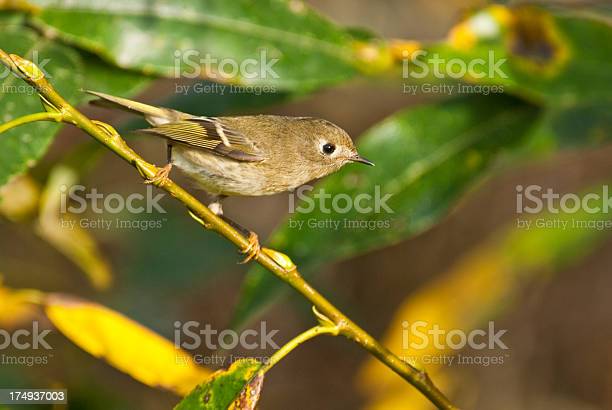 The Ruby-Crowned Kinglet (Regulus calendula) is a small North American songbird. It is among the smallest songbirds on the continent. It has olive-green plumage with a white ring around the eye and white bars on the wing. The male has a red crown patch which is usually concealed, making the male and female identical in appearance. The juvenile kinglet is similar in plumage to the adults. The kinglet is a migratory bird. Its range extends from Alaska and northwest Canada south to Mexico. Its breeding habitat is spruce and fir forests in the mountainous regions of the United States and Canada. The kinglet builds a hanging cup-shaped nest in which it lays up to 12 eggs. Its diet consists mainly of insects but the kinglet also eats fruits and seeds. This female ruby-crowned kinglet was photographed at the Nisqually National Wildlife Refuge near Olympia, Washington State, USA.