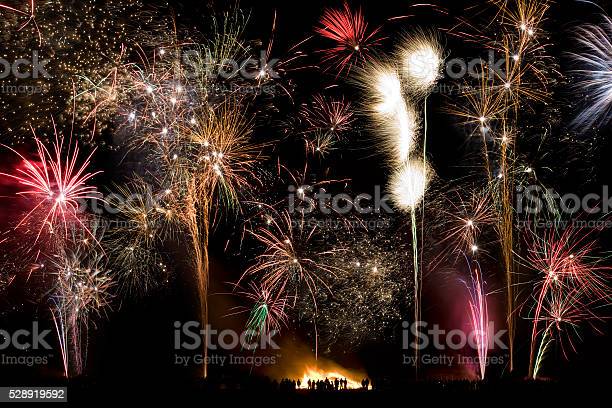 Guy Fawkes Night (also known as Bonfire Night, Fireworks Night) is an annual celebration on the evening of the 5th of November. It celebrates the foiling of the Gunpowder Plot of the 5th of November, 1605 in which a number of Catholic conspirators, including Guy Fawkes, were alleged to be attempting to blow up the Houses of Parliament in London, England. It is primarily marked in the United Kingdom. This photograph is of a large organized firework disply in the village of Slingsby in North Yorkshire in North East England. Fireworks were originally invented by the Chinese for entertainment purposes, as a natural extension of the Chinese invention of gunpowder.

What's a royalty-free license?
Royalty-free licenses let you pay once to use copyrighted images and video clips in personal and commercial projects on an ongoing basis without requiring additional payments each time you use that content. It's a win-win, and it's why everything on iStock is only available royalty-free — including all Bonfire images and footage.
What kinds of royalty-free files are available on iStock?
Royalty-free licenses are the best option for anyone who needs to use stock images commercially, which is why every file on iStock — whether it’s a photo, illustration or video clip — is only available royalty-free.
How can you use royalty-free images and video clips?
From social media ads to billboards, PowerPoint presentations to feature films, you're free to modify, resize and customize every asset on iStock — including all Bonfire images and footage — to fit your projects. With the exception of "Editorial use only" photos (which can only be used in editorial projects and can't be modified), the possibilities are limitless.