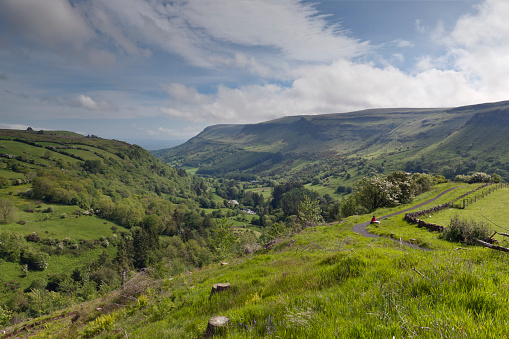 Glenariff is a valley of County Antrim, Northern Ireland. Known for lush farmland, this glacially carved glen has a mouth on the North Channel of the Irish Sea at the town of Waterfoot. Here is the view from the Glenariff Forest Park with an anonymous seated human figure contemplating the landscape. Foreground are the stumps of mature trees cut by the forest service to control the oomycete plant pathogen Phytophthora ramorum. We visited June 2014, the year before, October 2013, the Belfast Telegraph reported "Northern Ireland is close to the point where it will be impossible to eradicate a virulent disease from the forests where it has taken hold." Glenariff held one of those forests. The foreground tree stumps are victims of that struggle.

What's a royalty-free license?
Royalty-free licenses let you pay once to use copyrighted images and video clips in personal and commercial projects on an ongoing basis without requiring additional payments each time you use that content. It's a win-win, and it's why everything on iStock is only available royalty-free — including all Agricultural Field images and footage.
What kinds of royalty-free files are available on iStock?
Royalty-free licenses are the best option for anyone who needs to use stock images commercially, which is why every file on iStock — whether it’s a photo, illustration or video clip — is only available royalty-free.
How can you use royalty-free images and video clips?
From social media ads to billboards, PowerPoint presentations to feature films, you're free to modify, resize and customize every asset on iStock — including all Agricultural Field images and footage — to fit your projects. With the exception of "Editorial use only" photos (which can only be used in editorial projects and can't be modified), the possibilities are limitless.