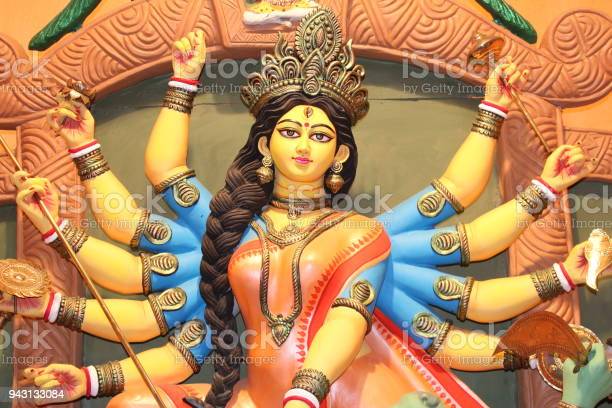 Goddess Durga is one of the most attractive and popular forms of worship for Hindus.The Goddess is depicted with ten hands holding weapons, three eyes and riding a lion. Goddess Durga is regarded as the Supreme Power which is the driving force behind all the acts of creation, preservation and destruction.The literal meaning of the word Durga is a fort. The significance of this title to Mother goddess indicates that she protects her devotees like the fort protects an empire.

What's a royalty-free license?
Royalty-free licenses let you pay once to use copyrighted images and video clips in personal and commercial projects on an ongoing basis without requiring additional payments each time you use that content. It's a win-win, and it's why everything on iStock is only available royalty-free — including all Durga images and footage.
What kinds of royalty-free files are available on iStock?
Royalty-free licenses are the best option for anyone who needs to use stock images commercially, which is why every file on iStock — whether it’s a photo, illustration or video clip — is only available royalty-free.
How can you use royalty-free images and video clips?
From social media ads to billboards, PowerPoint presentations to feature films, you're free to modify, resize and customize every asset on iStock — including all Durga images and footage — to fit your projects. With the exception of "Editorial use only" photos (which can only be used in editorial projects and can't be modified), the possibilities are limitless.