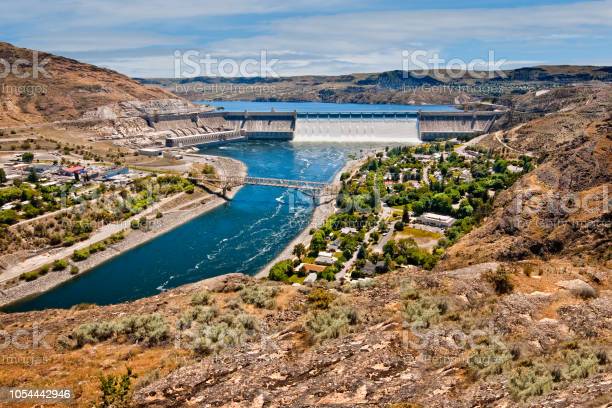 Grand Coulee Dam is a concrete dam on the Columbia River built to generate hydroelectric power and provide irrigation water. The dam and original two powerhouses were constructed between 1933 and 1942. Power from the dam fueled the growing industries of the Pacific Northwest in the 1940’s and 1950’s and also helped win World War II. Construction of the dam created Lake Roosevelt and forced the relocation of over 3,000 people including many Native Americans whose ancestral land was flooded. A third powerhouse was completed in 1974 making Grand Coulee Dam the largest power station in the United States. Grand Coulee Dam was photographed from Crown Point at Crown Point State Park near Grand Coulee, Washington State, USA.