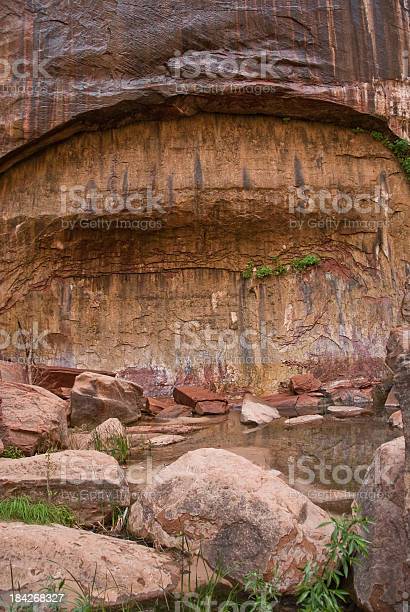 Download this Grotto At The Base Of A Cliff photo now. And search more of iStock's library of royalty-free stock images that features Utah photos available for quick and easy download.Product #:gm184268327$33.00iStockIn stock
Images
Only from iStock

Grotto at the Base of a Cliff stock photo

Zion Canyon is a unique and different experience than the Grand Canyon. At Zion, you are standing at the bottom looking up where at the Grand Canyon you are at the top looking down. Zion Canyon is mostly made up of sedimentary rocks, bits and pieces of older rocks that have been deposited in layers after much weathering and erosion. These rock layers tell stories of an ancient ecosystem very different from what Zion looks like today. About 110 – 200 million years ago Zion and the Colorado Plateau were near sea level and were close to the equator. Since then they have been uplifted and eroded to form the scenery we see today. Zion Canyon has had a 10,000-year history of human habitation. Most of this history was not recorded and has been interpreted by archeologists and anthropologist from clues left behind. Archeologists have identified sites and artifacts from the Archaic, Anasazi, Fremont and Southern Paiute cultures. Mormon pioneers settled in the area and began farming in the 1850s. Today, the descendants of both the Paiute and Mormons still live in the area. On November 19, 1919 Zion Canyon was established as a national park. Like a lot of public land, the Zion area benefited from infrastructure work done during the Great Depression of the 1930’s by government sponsored organizations like the Civil Works Administration (CWA) and the Civilian Conservation Corps (CCC). During their nine years at Zion the CWA and CCC built trails, parking areas, campgrounds, buildings, fought fires and reduced flooding of the Virgin River. This view of the red rocks of Zion Canyon was photographed from the Riverside Walk Trail in Zion National Park near Springdale, Utah, USA.