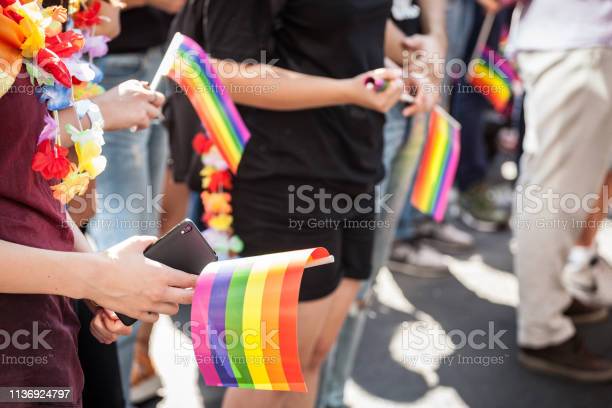 Download this Hands Of A Girl Holding A Smartphone Telephone With A Camera And A Rainbow Gay Flag During A Gay Pride The Rainbow Flag Is One Of The Symbols Of The Lgbtq Community photo now. And search more of iStock's library of royalty-free stock images that features Telephone photos available for quick and easy download.Product #:gm1136924797$12.00iStockIn stock
Images

Hands of a girl holding a smartphone telephone with a camera and a rainbow gay flag during a Gay Pride. The rainbow flag is one of the symbols of the LGBTQ community stock photo

Picture of the hands of a young woman holding a rainbow flag in the hands symbol of the homosexual struggle, during a gay demonstration, jointly with a smartphone. The rainbow flag, commonly known as the gay pride flag or LGBT pride flag, is a symbol of lesbian, gay, bisexual and transgender (LGBT) pride and LGBT social movements. Other older uses of rainbow flags include a symbol of peace.

What's a royalty-free license?
Royalty-free licenses let you pay once to use copyrighted images and video clips in personal and commercial projects on an ongoing basis without requiring additional payments each time you use that content. It's a win-win, and it's why everything on iStock is only available royalty-free — including all Telephone images and footage.
What kinds of royalty-free files are available on iStock?
Royalty-free licenses are the best option for anyone who needs to use stock images commercially, which is why every file on iStock — whether it’s a photo, illustration or video clip — is only available royalty-free.
How can you use royalty-free images and video clips?
From social media ads to billboards, PowerPoint presentations to feature films, you're free to modify, resize and customize every asset on iStock — including all Telephone images and footage — to fit your projects. With the exception of "Editorial use only" photos (which can only be used in editorial projects and can't be modified), the possibilities are limitless.