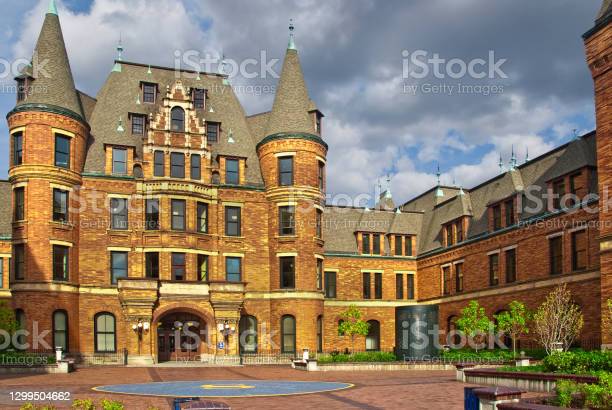 Stadium High School was originally built in 1891 as a hotel for the Northern Pacific Railroad Company. The financial panic of 1893 brought the construction to a halt. The unfinished building was subsequently used as a storage facility. On October 11, 1898 the building was destroyed by a fire. In 1904 the building was purchased by the Tacoma School District with the intention of turning it into a high school. The reconstructed building was opened on September 10, 1906 as Tacoma High School. It was later renamed Stadium High. The school achieved fame as the main location for the filming of the 1999 movie “Ten Things I Hate About You”. Stadium High School is located in Tacoma, Washington State, USA. What's a royalty-free license?
Royalty-free licenses let you pay once to use copyrighted images and video clips in personal and commercial projects on an ongoing basis without requiring additional payments each time you use that content. It's a win-win, and it's why everything on iStock is only available royalty-free — including all Private School Education images and footage.
What kinds of royalty-free files are available on iStock?
Royalty-free licenses are the best option for anyone who needs to use stock images commercially, which is why every file on iStock — whether it’s a photo, illustration or video clip — is only available royalty-free.
How can you use royalty-free images and video clips?
From social media ads to billboards, PowerPoint presentations to feature films, you're free to modify, resize and customize every asset on iStock — including all Private School Education images and footage — to fit your projects. With the exception of "Editorial use only" photos (which can only be used in editorial projects and can't be modified), the possibilities are limitless.