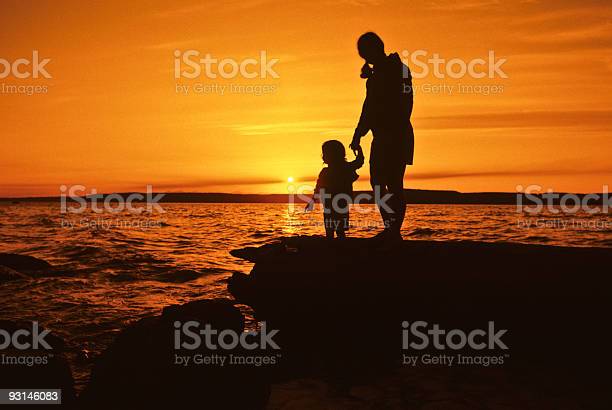 Puget Sound is a special body of water that belongs exclusively to Washington State. From the saltwater marshland of Olympia and Nisqually to the windy Strait of Juan de Fuca and the San Juan Islands, Puget Sound exhibits a quiet beauty that is quintessentially Washington. Puget Sound and its adjacent waters form a vast inland extension to the Pacific Ocean. Its complex network of straits, bays, canals and inlets give Western Washington a distinctive personality. Puget Sound along with its surrounding mountains has a major effect on the region's temperate climate. The area was first visited by Europeans in 1792 with British explorer George Vancouver's expedition. Captain Vancouver gave the region many of the place names which are still in use today. Not only does Puget Sound have a rich history, it also has some of the greatest scenery in the country. Sunsets over Puget Sound can be especially beautiful and an inspiration to photographers. This silhouette picture of a mother and daughter was photographed as the sun set over Puget Sound from Dash Point State Park near Tacoma, Washington State, USA.