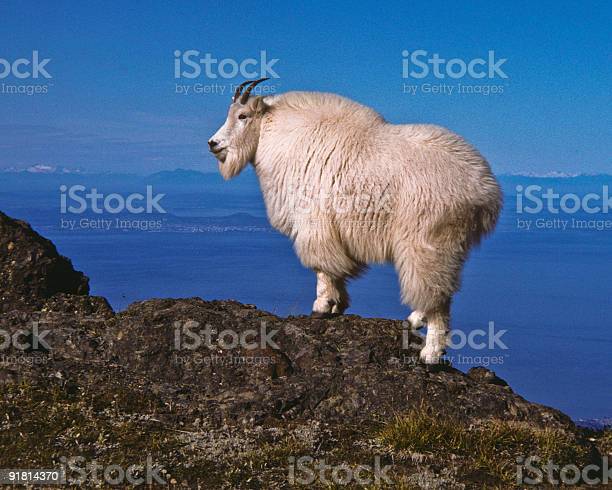 The Mountain Goat (Oreamnos americanus), also known as the Rocky Mountain Goat, is a large-hoofed ungulate found only in North America. A subalpine to alpine species, it is a sure-footed climber commonly seen on cliffs and in meadows. The species is not native to the Olympic Penninsula where they were introduced during the early 20th century. This goat was photographed on Klahane Ridge in Olympic National Park, Washington State, USA. What's a royalty-free license?
Royalty-free licenses let you pay once to use copyrighted images and video clips in personal and commercial projects on an ongoing basis without requiring additional payments each time you use that content. It's a win-win, and it's why everything on iStock is only available royalty-free — including all Mountain Goat images and footage.
What kinds of royalty-free files are available on iStock?
Royalty-free licenses are the best option for anyone who needs to use stock images commercially, which is why every file on iStock — whether it’s a photo, illustration or video clip — is only available royalty-free.
How can you use royalty-free images and video clips?
From social media ads to billboards, PowerPoint presentations to feature films, you're free to modify, resize and customize every asset on iStock — including all Mountain Goat images and footage — to fit your projects. With the exception of "Editorial use only" photos (which can only be used in editorial projects and can't be modified), the possibilities are limitless.