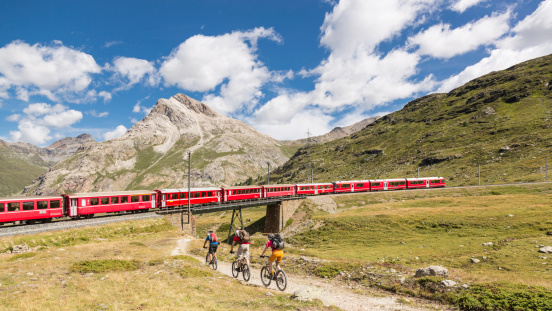 Three mountainbikers on their way down from the Bernina Pass are crossing the Bernina railway. It is a single track railway line forming part of the Rhaetian Railway. It links the spa resort of St. Moritz, in the Canton of Graubünden, Switzerland, with the town of Tirano, in the Province of Sondrio, Italy, via the Bernina Pass. Reaching a height of 2,253 metres (7,392 ft) above sea level, it is the highest railway crossing in Europe. It also ranks as the highest adhesion railway of the continent, and - with inclines of up to 7% - as one of the steepest adhesion railways in the world. The Bernina Railway is recorded in the list of UNESCO World Heritage Sites in 2008. The most famous trains operating on the Bernina Railway are known as the Bernina Express.

What's a royalty-free license?
Royalty-free licenses let you pay once to use copyrighted images and video clips in personal and commercial projects on an ongoing basis without requiring additional payments each time you use that content. It's a win-win, and it's why everything on iStock is only available royalty-free — including all Adult images and footage.
What kinds of royalty-free files are available on iStock?
Royalty-free licenses are the best option for anyone who needs to use stock images commercially, which is why every file on iStock — whether it’s a photo, illustration or video clip — is only available royalty-free.
How can you use royalty-free images and video clips?
From social media ads to billboards, PowerPoint presentations to feature films, you're free to modify, resize and customize every asset on iStock — including all Adult images and footage — to fit your projects. With the exception of "Editorial use only" photos (which can only be used in editorial projects and can't be modified), the possibilities are limitless.