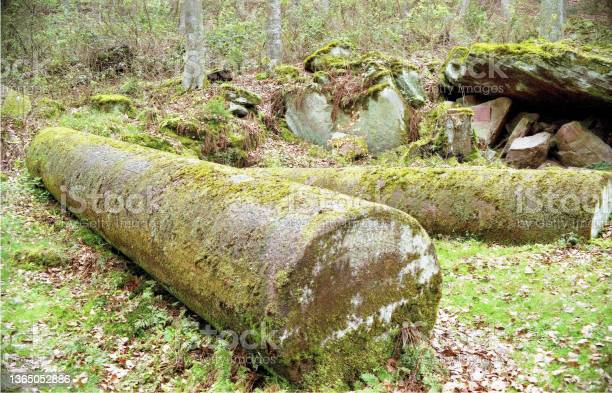 Nature...This shot is the 3rd of three shots, showing ancient Roman Columns, lying deep in the Spessart Forest of Bavaria, Germany. According to local history, these columns were dug out and carved on location, from the red sand stone, common to this area, and favored by the Romans. They were then slid down the mountain side to barges on the Main River below, and then down the Rhine, to somewhere within the Roman Empire of the time. Inscriptions, probably Latin, can still be seen, carved into the sides and ends of each column. This quarry was abandoned, probably as the Roman influence declined. This photo is from a scanned slide. What's a royalty-free license?
Royalty-free licenses let you pay once to use copyrighted images and video clips in personal and commercial projects on an ongoing basis without requiring additional payments each time you use that content. It's a win-win, and it's why everything on iStock is only available royalty-free — including all Forest images and footage.
What kinds of royalty-free files are available on iStock?
Royalty-free licenses are the best option for anyone who needs to use stock images commercially, which is why every file on iStock — whether it’s a photo, illustration or video clip — is only available royalty-free.
How can you use royalty-free images and video clips?
From social media ads to billboards, PowerPoint presentations to feature films, you're free to modify, resize and customize every asset on iStock — including all Forest images and footage — to fit your projects. With the exception of "Editorial use only" photos (which can only be used in editorial projects and can't be modified), the possibilities are limitless.