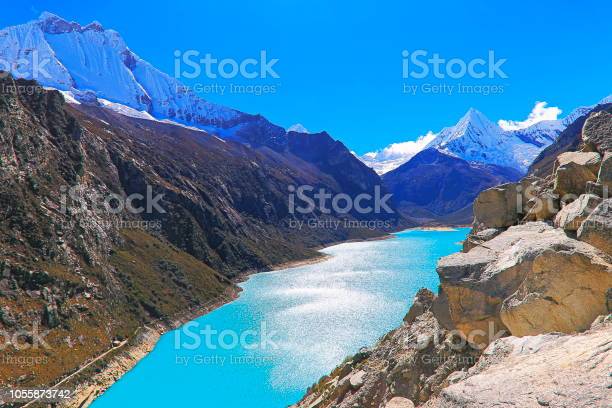 Turquoise Paron lake in Cordillera Blanca, snowcapped mountain range in Peruvian Andes - Ancash region, Peru Lake Parón is the largest lake in the Cordillera Blanca, on the Peruvian Andes, 32 km E from the city Caraz, at 4185 m asl. It is nested and surrounded by several snow peaks such as Aguja I 5,840 m, Aguja II 5m888 m, Aguja III 5,775 m, Caraz I 6,025 m, Qaras II 6,020 m, Qaras III 5,720 m, Artesonraju 6,025 m, Parón 5,600 m, Pirámide 5,885 m, Chacraraju W 6,112 m, Chacraraju E 6,001 m, Pisco 5,772 m, Huandoy E 6000, Huandoy N 6395 m and Huandoy W 6,356 m. It is one of the most popular areas for climbing in Peru, incThe lake itself is within the borders of the Huascarán National Park. The water level is controlled by a tunnel and underwater gate, to keep water level at 4,155 m asl aiming a double objective: to prevent the overflow and the resulting risk for the downstream population and to manage the river discharge.luding the so famous The Sphinx 5325m, a granite monolith, offering at least 13 big wall routes. What's a royalty-free license?
Royalty-free licenses let you pay once to use copyrighted images and video clips in personal and commercial projects on an ongoing basis without requiring additional payments each time you use that content. It's a win-win, and it's why everything on iStock is only available royalty-free — including all Above images and footage.
What kinds of royalty-free files are available on iStock?
Royalty-free licenses are the best option for anyone who needs to use stock images commercially, which is why every file on iStock — whether it’s a photo, illustration or video clip — is only available royalty-free.
How can you use royalty-free images and video clips?
From social media ads to billboards, PowerPoint presentations to feature films, you're free to modify, resize and customize every asset on iStock — including all Above images and footage — to fit your projects. With the exception of "Editorial use only" photos (which can only be used in editorial projects and can't be modified), the possibilities are limitless.