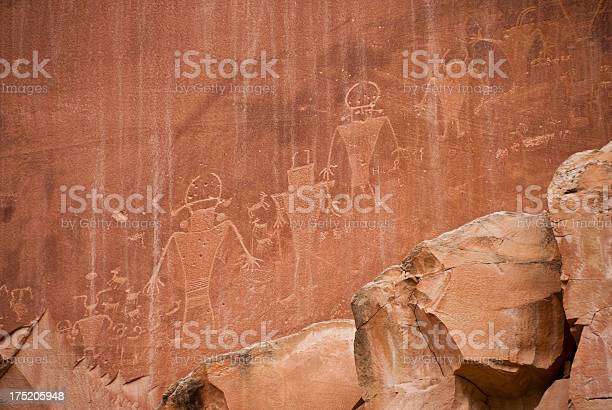 Download this Petroglyphs On The Canyon Wall photo now. And search more of iStock's library of royalty-free stock images that features Moab - Utah photos available for quick and easy download.Product #:gm175205948$33.00iStockIn stock
Images
Only from iStock

Capitol Reef National Park is in the desert of southern Utah. The park is filled with cliffs, towers, domes and arches. The first part of the park’s name derives from the many dome shaped Navajo Sandstone formations each of which resembles the US capitol. The second half of the name refers to the parallel impassable ridges which the early settlers called reefs. The first paved road through this area wasn’t constructed until 1962. Central to the area is the famous Waterpocket Fold, a 100-mile wrinkle in the earth, which is 65 million years old and the largest exposed monocline in North America. The Fremont River has carved canyons through some parts of the Waterpocket Fold but the area remains a dry desert. The park is also a showcase for ancient history and the more recent history of the Mormon pioneers. This scene of ancient petroglyphs was photographed in Capitol Reef National Park near Fruita, Utah, USA.