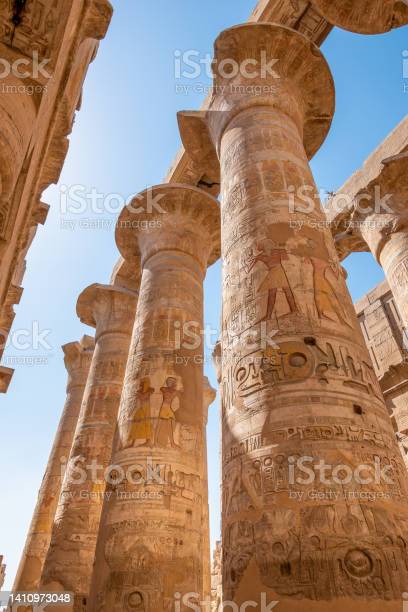 Karnak Temple, Luxor, Egypt - July 26, 2022: The Karnak Temple Complex, commonly known as Karnak comprises a vast mix of decayed temples, pylons, chapels, and other buildings near Luxor, Egypt. Construction at the complex began during the reign of Senusret I (reigned 1971–1926 BCE) in the Middle Kingdom (around 2000–1700 BCE) and continued into the Ptolemaic Kingdom (305–30 BCE), although most of the extant buildings date from the New Kingdom. It is part of the monumental city of Thebes (Luxor), and in 1979 it was inscribed on the UNESCO World Heritage List along with the rest of the city. What's a royalty-free license?
Royalty-free licenses let you pay once to use copyrighted images and video clips in personal and commercial projects on an ongoing basis without requiring additional payments each time you use that content. It's a win-win, and it's why everything on iStock is only available royalty-free — including all Egypt images and footage.
What kinds of royalty-free files are available on iStock?
Royalty-free licenses are the best option for anyone who needs to use stock images commercially, which is why every file on iStock — whether it’s a photo, illustration or video clip — is only available royalty-free.
How can you use royalty-free images and video clips?
From social media ads to billboards, PowerPoint presentations to feature films, you're free to modify, resize and customize every asset on iStock — including all Egypt images and footage — to fit your projects. With the exception of "Editorial use only" photos (which can only be used in editorial projects and can't be modified), the possibilities are limitless.