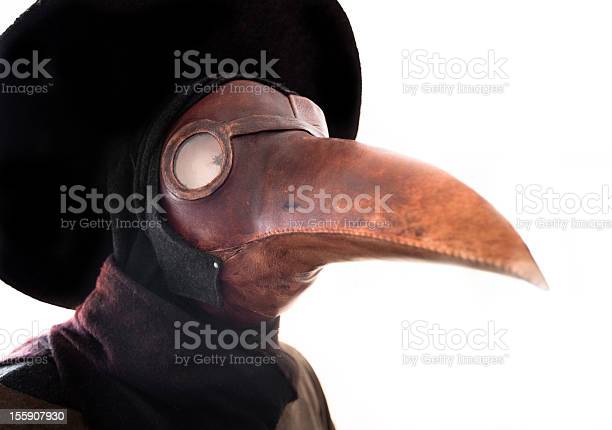 A primitive gas mask in the shape of a bird's beak. A common belief at the time was that the plague was spread by birds. It was thought that by dressing in a bird-like mask, the wearer could draw the plague away from the patient and onto the garment the plague doctor wore. The mask also included red glass eyepieces, which were thought to make the wearer impervious to evil. The beak of the mask was often filled with strongly aromatic herbs and spices to overpower the miasmas or "bad air" which was also thought to carry the plague. At the very least, it may have served a dual purpose, also dulling the smell of unburied corpses, sputum, and ruptured bouboules in plague victims.

What's a royalty-free license?
Royalty-free licenses let you pay once to use copyrighted images and video clips in personal and commercial projects on an ongoing basis without requiring additional payments each time you use that content. It's a win-win, and it's why everything on iStock is only available royalty-free — including all Bubonic Plague images and footage.
What kinds of royalty-free files are available on iStock?
Royalty-free licenses are the best option for anyone who needs to use stock images commercially, which is why every file on iStock — whether it’s a photo, illustration or video clip — is only available royalty-free.
How can you use royalty-free images and video clips?
From social media ads to billboards, PowerPoint presentations to feature films, you're free to modify, resize and customize every asset on iStock — including all Bubonic Plague images and footage — to fit your projects. With the exception of "Editorial use only" photos (which can only be used in editorial projects and can't be modified), the possibilities are limitless.