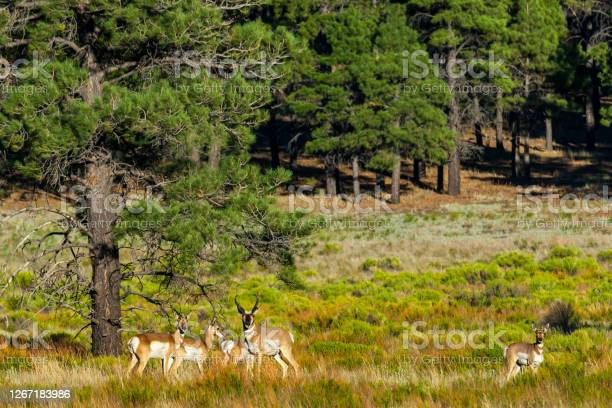 Download this Pronghorn Herd In A Meadow photo now. And search more of iStock's library of royalty-free stock images that features Flagstaff - Arizona photos available for quick and easy download.Product #:gm1267183986$33.00iStockIn stock
Images
Only from iStock

The Pronghorn (Antilocapra americana) is a species of artiodactyl (even-toed, hoofed) mammal native to interior western and central North America. Although it is commonly thought of and called an antelope it is not a true antelope. The pronghorn is the only surviving member of the Antilocapridae family and has been in North America for over a million years. The pronghorn has a similar body shape to a deer but stockier and shorter legged. Both males and females grow horns but the male horns are larger. The horns are shed each year as the new horns grow from underneath. The pronghorn weighs between 90 and 120 pounds and stands about 3 1/2 feet tall at the shoulder. It has a tan to reddish brown body with white markings throughout. The pronghorn is the fastest land mammal in the Western Hemisphere. Its great speed enables the pronghorn to outrun most predators. Pronghorns are migratory herd animals. Their migration routes have been threatened by fencing and fragmentation of their habitat. Pronghorns cannot jump over traditional barb wire fences like deer and elk can. They try to pass underneath and sometimes get caught in the fencing. Newer types of fencing have plastic pipe under the bottom strands which allows the animals to pass through. Pronghorns are quite numerous and in some areas like Wyoming and northern Colorado the pronghorn population at times has exceeded the human population. This herd of pronghorn was photographed at Bonito Park next to Sunset Crater Volcano National Monument in the Coconino National Forest near Flagstaff, Arizona, USA.