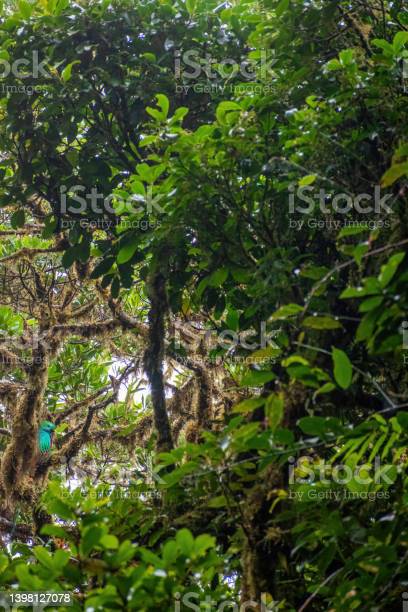 Monteverde Cloud Forest, Costa Rica - May 17, 2022: The most famous quetzal habitat in Costa Rica and perhaps in the world is Monteverde Cloud Forest Reserve. In the cloud forests of Costa Rica the quetzal breeding season (and best viewing) is mid February into June or July when the wild avocado trees and other fruit from trees in the laurel family (Lauraceae) are producing. The Monteverde Cloud Forest Reserve is a Costa Rican reserve located along the Cordillera de Tilarán within the Puntarenas and Alajuela provinces. Named after the nearby town of Monteverde and founded in 1972. The Reserve consists of over 10,500 hectares (26,000 acres) of cloud forest. It draws roughly 70,000 visitors a year. The Reserve consists of 6 ecological zones, 90% of which are virgin forest. A high biodiversity, consisting of over 2,500 plant species (including the most orchid species in a single place), 100 species of mammals, 400 bird species, 120 reptilian and amphibian species, and thousands of insects, has drawn both scientists and tourists alike.