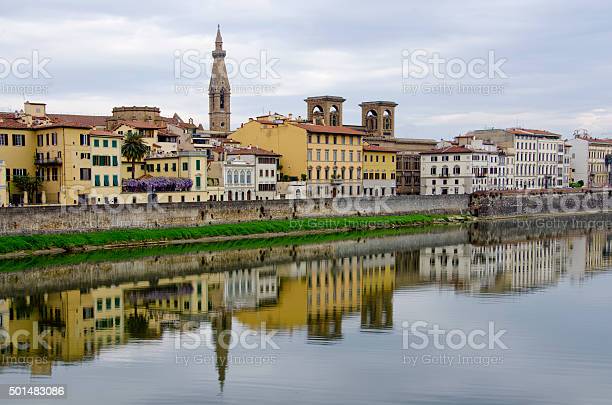 Reflections Along the Arno River in Florence, Italy stock photo

Florence, Italy is known as the birthplace of the Renaissance. Founded in 80 B.C. by Lucius Cornelius Sulla as a settlement for his soldiers, it was named Fluentia, which later became Firenze. Renown artists like Michelangelo, Leonardo da Vinci, Botticelli and Donatello all lived, studied and worked in Florence, along with architects like Brunelleschi, who designed the dome of the city's duomo, Cattedrale di Santa Maria del Fiore. Florence has a colorful history as a political and financial center, dominated for over 150 years by the Medici family and is also known as a fashion center. Today, it's rich heritage in art can be enjoyed at several galleries and museums including the Uffizi and the Gallerie dell'Accademia, as well as the Pitti Palace (Palazzo Pitti). Pictured here is the downtown district with old, but stately buildings reflected in the Arno River.