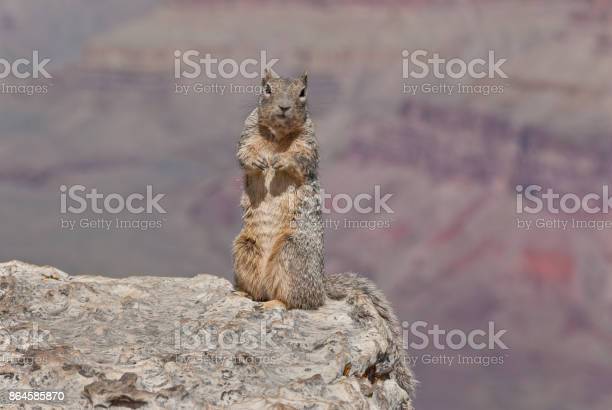 The Rock Squirrel (Spermophilus variegatus) is fairly large ground squirrel but can also be seen climbing boulders, rocks and trees. It is typically 17-21 inches long, with a bushy tail up to 8 inches long. Rock squirrels are grayish-brown, with some patches of cinnamon color. They have a light-colored ring around their eyes and pointed ears that project well above their heads. In the northern reach of their habitat, rock squirrels hibernate during the colder months of the year. In southern areas, rock squirrels may not hibernate at all. The diet of the rock squirrel is predominantly herbivorous, consisting mostly of leaves, stems and seeds. They may also eat some insects and other small animals. Because of high human visitation, rock squirrels have become the most dangerous animals at the national parks of the American Southwest. Rock squirrels attack more tourists at the Grand Canyon than any other wild animal. Attacks have become so common that park rangers have begun warning tourists about the dangers. This rock squirrel was photographed at Yavapai Point in Grand Canyon National Park, Arizona, USA.