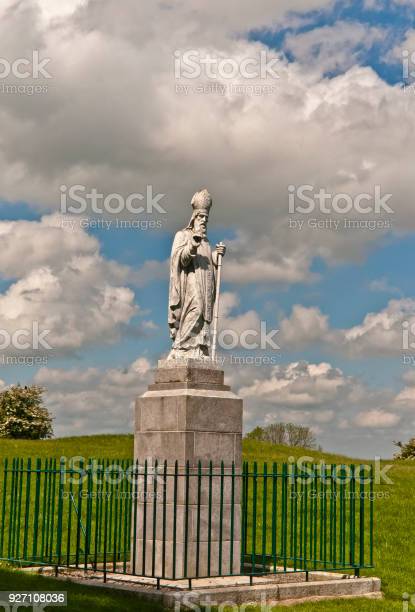 A statue of Saint Patrick fittingly welcomes visitors to the Hill of Tara, County Meath, Ireland. This statue of cast concrete was an existing statue donated by the Sisters of Charity, moved from an existing installation to the Hill of Tara in the year 2000 AD to replace the previous statue removed in 1992 in a state of disrepair. The creator is anonymous, the is no plaque or other attribution on or around the statue. I researched this information March 12, 2018 using internet resources. My research is attached in an Microsoft Word document submitted with releases. The original statue was erected on the summit of the Hill of Tara shortly after Catholic emancipation in 1829, commemorated the events of 433AD when St. Patrick lit a bonfire on the nearby hill of Slane on the eve of Easter Sunday.