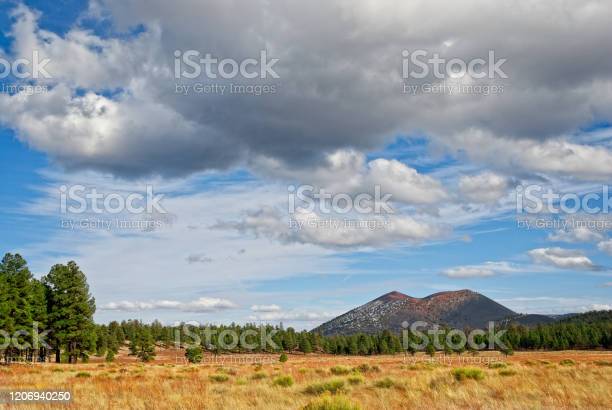 Sunset Crater is one of nearly 600 volcanoes in the San Francisco Volcanic Field. It is the youngest volcano in the area, forming around 1,000 years ago. This 1,000-foot-high cinder cone formed when basalt magma rose directly to the surface through a primary vent. Gas pressure in the volcano produced a fountain of lava about 850 feet high. The lava was blown into pieces, which cooled in flight and piled into a cone-shaped hill. Sunset Crater was a short-lived volcano, lasting only months or a couple of years at the most. When famed explorer John Wesley Powell explored the San Francisco Volcanic Field in 1885 he wrote, "The contrast in the colors is so great that on viewing the mountain from a distance the red cinders seem to be on fire." His "Sunset" mountain became known officially as Sunset Crater. This view of Sunset Crater was photographed from Bonito Park, next to Sunset Crater Volcano National Monument, in the Coconino National Forest near Flagstaff, Arizona, USA.