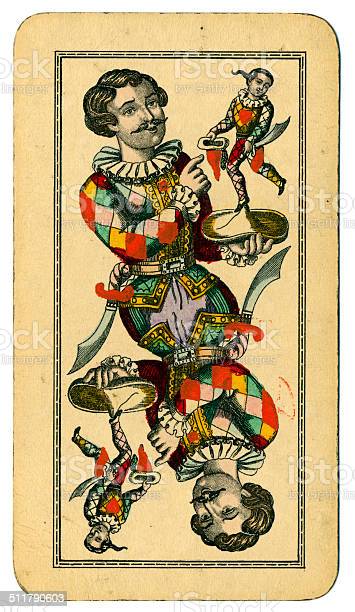 This is the Fool (Joker), an un-numbered picture card from a pack of large Tarot cards (called Taroch or Tarok in German). Cards in this pack measure 74 x 129mm. The maker is Fred. Piatnik & Sohne of Vienna. The Fool is a Harlequin holding a hat, and on the hat is a representation of himself. This design is in some ways similar to the Trump card number I (one), where Harlequin is shown holding a harp, and on the harp is a smaller version of himself. The history of Tarot goes back to 15th century Italy. There were 78 cards, including 21 'trump' cards and a 'fool' or 'skeench' dressed as a harlequin, which in modern packs would be called a joker. The large numbers of cards and the complicated rules led to a decline in the popularity of these Tarot card games. Austrian Taroch cards use French symbols (clubs, diamonds, hearts and spades), and a simplified pack numbering 54, which still includes the 21 trumps plus the fool. These make up the 22 'Taroch' (trump) cards. This particular pack was made by Piatnik (Vienna) in 1900.