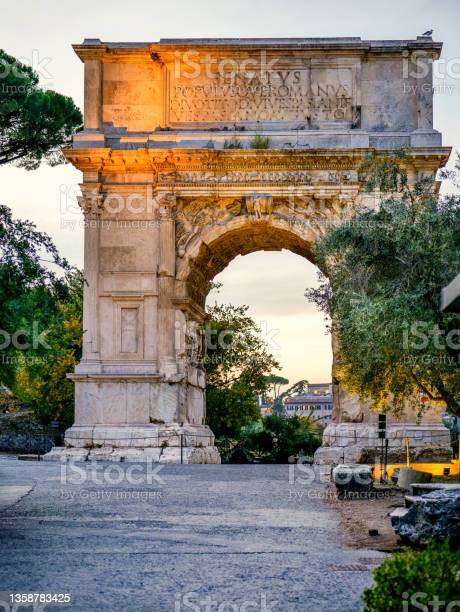 Download this The Beautiful Arch Of Titus In The Core Of The Roman Forums Along The Sacred Way photo now. And search more of iStock's library of royalty-free stock images that features Arch of Titus photos available for quick and easy download.Product #:gm1358783425$33.00iStockIn stock
Images
Only from iStock

A twilight view of the stunning Arch of Titus in the Roman Forums, in the historic heart of the Eternal City. Dedicated to Titus Vespasian Augustus, this triumphal arch was built in the year 90 AD. on the northern slopes of the Palatine Hill, along the Via Sacra (Sacred Way), to celebrate the victory of Titus in the Jewish War, which ended the Jewish revolt and caused the sacking of Jerusalem. On the upper part of the arch an inscription in Latin indicates: "The Senate and the Roman People to the Divus Titus Vespasian Augustus, son of the Divus Vespasian". In 1980 the historic center of Rome was declared a World Heritage Site by Unesco. Image in high definition format.

What's a royalty-free license?
Royalty-free licenses let you pay once to use copyrighted images and video clips in personal and commercial projects on an ongoing basis without requiring additional payments each time you use that content. It's a win-win, and it's why everything on iStock is only available royalty-free — including all Arch of Titus images and footage.
What kinds of royalty-free files are available on iStock?
Royalty-free licenses are the best option for anyone who needs to use stock images commercially, which is why every file on iStock — whether it’s a photo, illustration or video clip — is only available royalty-free.
How can you use royalty-free images and video clips?
From social media ads to billboards, PowerPoint presentations to feature films, you're free to modify, resize and customize every asset on iStock — including all Arch of Titus images and footage — to fit your projects. With the exception of "Editorial use only" photos (which can only be used in editorial projects and can't be modified), the possibilities are limitless.