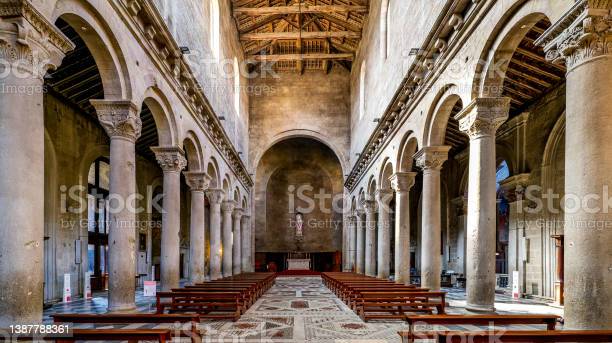 Download this The Beautiful Interior Of The Duomo Di San Lorenzo In The Heart Of The Medieval City Of Viterbo photo now. And search more of iStock's library of royalty-free stock images that features Altar photos available for quick and easy download.Product #:gm1387788361$33.00iStockIn stock
Images
Only from iStock

The majestic and imposing central nave and apse of the Duomo of San Lorenzo (Cathedral of Saint Lawrence), in the heart of the medieval city of Viterbo, in central Italy. Built in the Romanesque style in the 12th century, this cathedral became important in the history of the Catholicism when in the 13th century Viterbo became the seat of the Roman Pontiffs. The medieval center of Viterbo, the largest in Europe with countless historic buildings, churches and villages, stands on the route of the ancient Via Francigena (French Route) which in medieval times connected the regions of France to Rome, up to the commercial ports of Puglia, in southern Italy, to reach the Holy Land through the Mediterranean. Located 100 kilometers north of Rome along the current route of the Via Cassia and recognized as a city with a papal document from the year 852 AD, Viterbo is characterized by its stone and tuff constructions, materials abundantly present in this region of central Italy and which have always been used for the construction of houses and churches. Super wide angle image in high 16:9 and definition format. What's a royalty-free license?
Royalty-free licenses let you pay once to use copyrighted images and video clips in personal and commercial projects on an ongoing basis without requiring additional payments each time you use that content. It's a win-win, and it's why everything on iStock is only available royalty-free — including all Altar images and footage.
What kinds of royalty-free files are available on iStock?
Royalty-free licenses are the best option for anyone who needs to use stock images commercially, which is why every file on iStock — whether it’s a photo, illustration or video clip — is only available royalty-free.
How can you use royalty-free images and video clips?
From social media ads to billboards, PowerPoint presentations to feature films, you're free to modify, resize and customize every asset on iStock — including all Altar images and footage — to fit your projects. With the exception of "Editorial use only" photos (which can only be used in editorial projects and can't be modified), the possibilities are limitless.