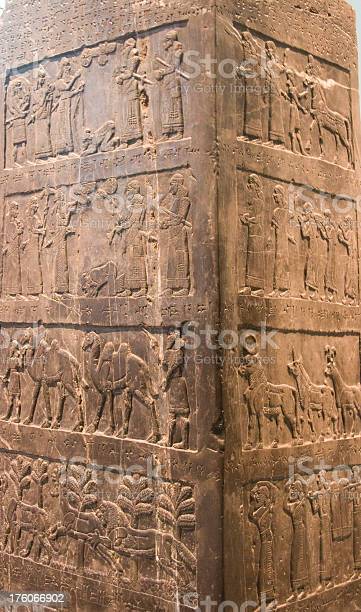 Download this The Black Obelisk Of Shalmaneser Iii photo now. And search more of iStock's library of royalty-free stock images that features Obelisk photos available for quick and easy download.Product #:gm176066902$33.00iStockIn stock
Images
Only from iStock

"The ""Black Obelisk"" of Shalmaneser III (reigned 858-824 BC) is a black limestone Neo-Assyrian bas-relief sculpture from Nimrud (ancient Kalhu), in northern Iraq. It is the most complete Assyrian obelisk yet discovered, and is historically significant because it displays the earliest ancient depiction of an Israelite, Jehu the son of Omri, as recorded in the Bible. Tribute offerings are shown being brought from identifiable regions and peoples. It was erected as a public monument in 825 BCE at a time of civil war."