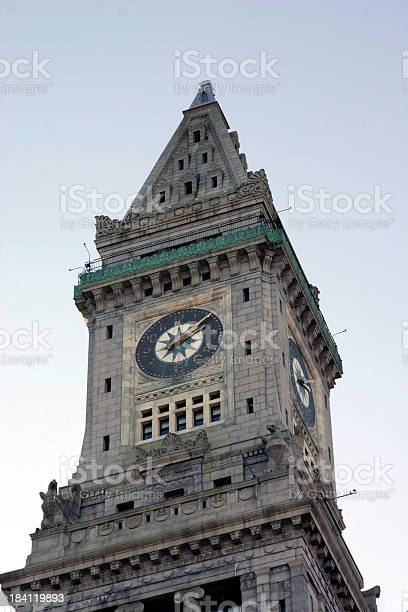 "The Custom House Tower at 3 McKinley Square is a turn of the century skyscraper in the Financial District neighborhood of Boston, Massachusetts. The original Custom House was built 1837-1847 in a neoclassical style by architect Ammi Burnham Young. It was then at the water\'s edge. This building was in the form of a four-faced Greek temple with fluted Doric columns, of granite, weighing some 42 tons each. Its interior rotunda was capped with a skylight dome.The tower was built as an addition to this existing base 1913-1915 by the architecture firm of Peabody and Stearns. Although Boston had at that time a 125-foot height restriction, the Custom House was federally-owned and not subject to these restrictions. The new tower was 151m (496ft) tall, easily Boston\'s tallest building until the 1947 John Hancock Tower which is just one foot shorter. Both were trumped by the 1964 construction of the Prudential Tower. The clock on the upper tower of the building, measures 22 feet in diameter. The building has 32 floors and was recently converted into an 80 room Marriott Hotel. Fourteen years before this conversion, the tower laid inaccessible and unoccupied."

What's a royalty-free license?
Royalty-free licenses let you pay once to use copyrighted images and video clips in personal and commercial projects on an ongoing basis without requiring additional payments each time you use that content. It's a win-win, and it's why everything on iStock is only available royalty-free — including all Custom House - Boston images and footage.
What kinds of royalty-free files are available on iStock?
Royalty-free licenses are the best option for anyone who needs to use stock images commercially, which is why every file on iStock — whether it’s a photo, illustration or video clip — is only available royalty-free.
How can you use royalty-free images and video clips?
From social media ads to billboards, PowerPoint presentations to feature films, you're free to modify, resize and customize every asset on iStock — including all Custom House - Boston images and footage — to fit your projects. With the exception of "Editorial use only" photos (which can only be used in editorial projects and can't be modified), the possibilities are limitless.