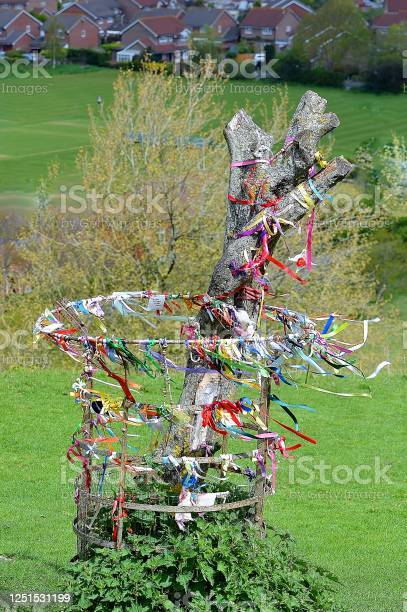 Here, some years after the thorn was vandalised, pilgrims continue to visit and adorn with flags. Wearyall Hill (Wirral Hill) is a long narrow ridge to the south west of Glastonbury. It's summit offers views across to Glastonbury Tor and the Somerset levels to one side, the town to another. Here, on this hill is the legend where the Glastonbury Holy Thorn begins. The original tree was said to have blossomed from the staff of Joseph of Arimathea whom legend says came to Glastonbury after the crucifixion. Glastonbury was once an inland isle, surrounded by water and only connected to the mainland by a narrow strip of land. Visitors to the Isle could sail up the tidal river Brue and legend tells us that on arrival, Joseph planted his staff which took root and blossomed into the now world-famous Glastonbury Thorn. The trees were very unusual because they flowered twice - once in the spring around Easter, and a second time at Christmas. Not surprisingly, they were seen as holy thorns. In the Civil Wars of the 17th century Puritan soldiers cut down the only remaining thorn because they saw it as an object of superstition. However, local people had kept cuttings, and it is from these that the thorn now growing in the abbey grounds is believed to descend. It continues to flower around Easter and again at Christmas. Other examples of the thorn grow elsewhere in Glastonbury, notably at St John's Church and Chalice Well. One was planted on Wearyall Hill in 1951 to mark the Festival of Britain, and this is the picture above vandalised in 2010. A new sapling has been planted nearby. What's a royalty-free license?
Royalty-free licenses let you pay once to use copyrighted images and video clips in personal and commercial projects on an ongoing basis without requiring additional payments each time you use that content. It's a win-win, and it's why everything on iStock is only available royalty-free — including all Glastonbury - England images and footage.
What kinds of royalty-free files are available on iStock?
Royalty-free licenses are the best option for anyone who needs to use stock images commercially, which is why every file on iStock — whether it’s a photo, illustration or video clip — is only available royalty-free.
How can you use royalty-free images and video clips?
From social media ads to billboards, PowerPoint presentations to feature films, you're free to modify, resize and customize every asset on iStock — including all Glastonbury - England images and footage — to fit your projects. With the exception of "Editorial use only" photos (which can only be used in editorial projects and can't be modified), the possibilities are limitless.