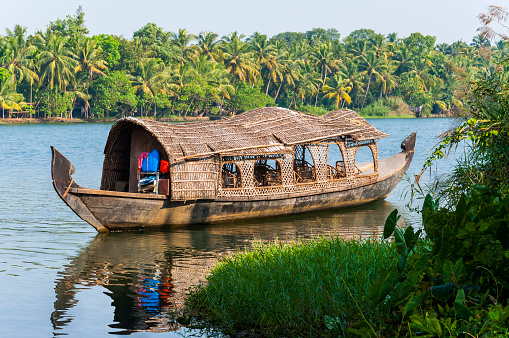 Download this Traditional Houseboat Of Kerala Backwaters On The River photo now. And search more of iStock's library of royalty-free stock images that features 2015 photos available for quick and easy download.Product #:gm496237436$12.00iStockIn stock

Traditional Houseboat of Kerala Backwaters on the river stock photo

This shot was made in Backwaters of Kerala, India near Kochi. Backwaters in Kerala is a network of 1500 km of canals both manmade and natural, 38 rivers and 5 big lakes extending from one end of Kerala to the other. Backwaters is one of the major tourism product of Kerala, being unique to the state. Meandering through the coastal areas of Kerala is a 900 kilometers (560 miles) long intricate network of lagoons, lakes, canals, estuaries and deltas of several rivers that flow into the Arabian Sea. This is a natural phenomenon, as major rivers and streams that flows within Kerala drain themselves into backwaters regions, resulting in creation of several small land strips, lagoons, islands etc, which opens to sea at few areas.

What's a royalty-free license?
Royalty-free licenses let you pay once to use copyrighted images and video clips in personal and commercial projects on an ongoing basis without requiring additional payments each time you use that content. It's a win-win, and it's why everything on iStock is only available royalty-free — including all 2015 images and footage.
What kinds of royalty-free files are available on iStock?
Royalty-free licenses are the best option for anyone who needs to use stock images commercially, which is why every file on iStock — whether it’s a photo, illustration or video clip — is only available royalty-free.
How can you use royalty-free images and video clips?
From social media ads to billboards, PowerPoint presentations to feature films, you're free to modify, resize and customize every asset on iStock — including all 2015 images and footage — to fit your projects. With the exception of "Editorial use only" photos (which can only be used in editorial projects and can't be modified), the possibilities are limitless.