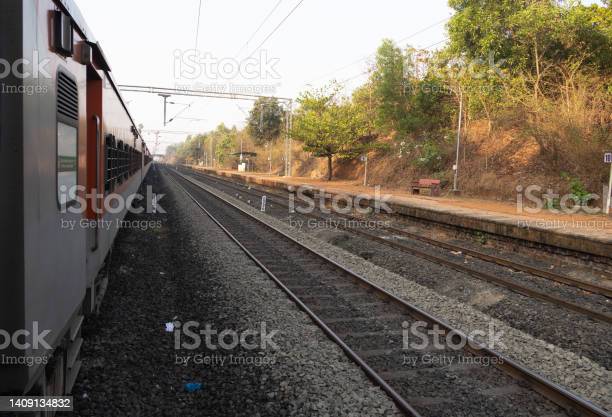 The Konkan Railway is a railway operated by the Konkan Railway Corporation, with its headquarters at CBD Belapur in Navi Mumbai, Maharashtra, India. The first passenger train ran on Konkan railway tracks on 20 March 1993, between Udupi and Mangalore. During its initial years of operation in the mountainous Konkan region, a number of accidents prompted Konkan Railway to implement new technology. Anti-collision devices, the Sky Bus and roll-on/roll-off are several of the railway's innovations. The 756.25 km (469.91 mi) long railway line connects the states of Maharashtra, Goa and Karnataka. The first train on the completed track was sent off on 26 January 1998

What's a royalty-free license?
Royalty-free licenses let you pay once to use copyrighted images and video clips in personal and commercial projects on an ongoing basis without requiring additional payments each time you use that content. It's a win-win, and it's why everything on iStock is only available royalty-free — including all Color Image images and footage.
What kinds of royalty-free files are available on iStock?
Royalty-free licenses are the best option for anyone who needs to use stock images commercially, which is why every file on iStock — whether it’s a photo, illustration or video clip — is only available royalty-free.
How can you use royalty-free images and video clips?
From social media ads to billboards, PowerPoint presentations to feature films, you're free to modify, resize and customize every asset on iStock — including all Color Image images and footage — to fit your projects. With the exception of "Editorial use only" photos (which can only be used in editorial projects and can't be modified), the possibilities are limitless.