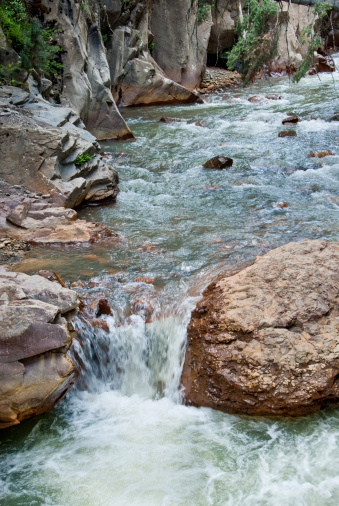 The name Uncompahgre comes from a Ute Indian word, which translates to "dirty water," "red lake," or "red water spring". It may refer to the many hot springs in the Ouray area. The Uncompahgre River is a 75-mile-long tributary of the Gunnison River which flows out of the San Juan Mountains at 12,215 ft Lake Como. The Uncompahgre is on the west side of the Continental Divide and flows past Ouray, Ridgway, Montrose, and Olathe, joining the Gunnison River in Delta. The Gunnison is a major tributary of the Colorado River system. In this scene, the Uncompahgre River was photographed as it passes through a narrow gorge in Ouray, Colorado, USA.

What's a royalty-free license?
Royalty-free licenses let you pay once to use copyrighted images and video clips in personal and commercial projects on an ongoing basis without requiring additional payments each time you use that content. It's a win-win, and it's why everything on iStock is only available royalty-free — including all Beauty In Nature images and footage.
What kinds of royalty-free files are available on iStock?
Royalty-free licenses are the best option for anyone who needs to use stock images commercially, which is why every file on iStock — whether it’s a photo, illustration or video clip — is only available royalty-free.
How can you use royalty-free images and video clips?
From social media ads to billboards, PowerPoint presentations to feature films, you're free to modify, resize and customize every asset on iStock — including all Beauty In Nature images and footage — to fit your projects. With the exception of "Editorial use only" photos (which can only be used in editorial projects and can't be modified), the possibilities are limitless.