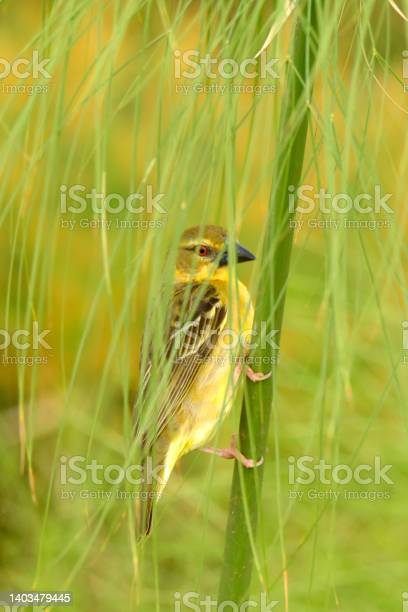 The village weaver (Ploceus cucullatus), also known as the spotted-backed weaver or black-headed weaver (the latter leading to easy confusion with P. melanocephalus), is a species of bird in the family Ploceidae found in much of sub-Saharan Africa. It has also been introduced to Portugal as well as to the islands of Hispaniola, Martinique, Puerto Rico, Mauritius and Réunion. This often abundant species occurs in a wide range of open or semi-open habitats, including woodlands and human habitation, and frequently forms large noisy colonies in towns, villages and hotel grounds. This weaver builds a large coarsely woven nest made of grass and leaf strips with a downward facing entrance which is suspended from a branch in a tree. Two to three eggs are laid. Village weavers are colonial breeders, so many nests may hang from one tree. Village weavers feed principally on seeds and grain, and can be a crop pest, but it will readily take insects, especially when feeding young, which partially redresses the damage to agriculture. The calls of this bird include harsh buzzes and chattering.