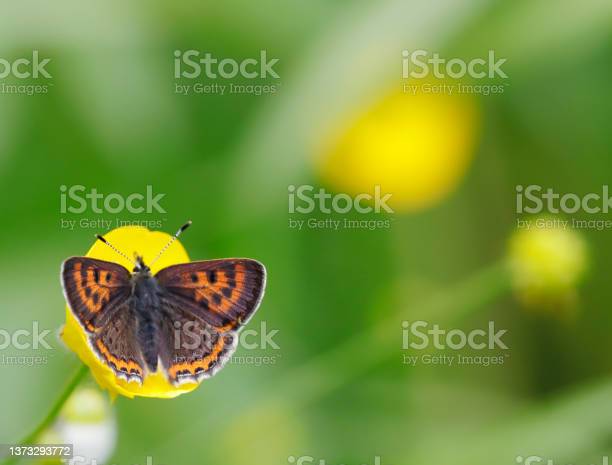 Lycaena helle, the violet copper, is a butterfly of the family Lycaenidae. It is found from the Pyrenees to northern Norway and from Belgium east across the Palearctic to Central Asia, Siberia and Amur.The wingspan is 24–26 mm. The butterfly flies from May to July depending on the location. Description from Seitz: C. amphidamas Esp. (= xanthe Lang, helle Schiff.). Smaller than the preceding forms, at the most as large as small phlaeas. Upperside dark brown, in the females of the spring brood the disc of the forewing reddish yellow, both wings with a sky-blue gloss, which is especially strong in the sun in live specimens. On the underside there is before the red submarginal band of the hindwing an always distinct bluish white lunate band, which in the female is usually continued on to the forewing and is accompanied by black dots. The summer-form obscura Ruhl is darker above and more yellow beneath. Otherwise the variability is less than in other Chrysophanus. Specimens from the high North have been separated as lapponica Backhaus, and Wheeler mentions that the gloss is more blue in some districts and more violet in others. — In Central and North Europe, from Belgium, Baden, and Switzerland eastward to Amurland and northward to Scandinavia and Lapland, sporadic and absent from large districts. Eggs are laying in June and autumn on Polygonum bistorta (said to occur also on Rumex). The butterflies are on the wing in May and again in July and August in damp meadows, very plentiful at their flight-places. In the north the species is found especially in the plains, while in the south of its area it is more plentiful in the mountains, where it occurs up to 2000m (source Wikipedia). Nowadays vulnerable in the South of Belgium and the Eifel. This Picture is made during a long weekend in the Eifel (Germany) in June 2019.

What's a royalty-free license?
Royalty-free licenses let you pay once to use copyrighted images and video clips in personal and commercial projects on an ongoing basis without requiring additional payments each time you use that content. It's a win-win, and it's why everything on iStock is only available royalty-free — including all North Rhine Westphalia images and footage.
What kinds of royalty-free files are available on iStock?
Royalty-free licenses are the best option for anyone who needs to use stock images commercially, which is why every file on iStock — whether it’s a photo, illustration or video clip — is only available royalty-free.
How can you use royalty-free images and video clips?
From social media ads to billboards, PowerPoint presentations to feature films, you're free to modify, resize and customize every asset on iStock — including all North Rhine Westphalia images and footage — to fit your projects. With the exception of "Editorial use only" photos (which can only be used in editorial projects and can't be modified), the possibilities are limitless.