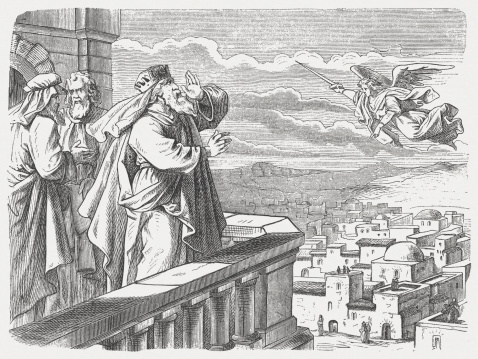 "So the Lord sent a plague through Israel, and 70,000 Israelite men died. God sent an angel to ravage Jerusalem. As he was doing so, the Lord watched and relented from his judgment. He told the angel who was destroying, aThataas enough! Stop now!aA Now the Lordaas angel was standing near the threshing floor of Ornan the Jebusite. David looked up and saw the Lordaas messenger standing between the earth and sky with his sword drawn and in his hand, stretched out over Jerusalem. David and the leaders, covered with sackcloth, threw themselves down with their faces to the ground. (1 Chronicels, Chapter 21, 14-16). Woodcut after a drawing by Julius Schnorr von Carolsfeld (German painter, 1794 - 1872) from my archive, published in 1877."

What's a royalty-free license?
Royalty-free licenses let you pay once to use copyrighted images and video clips in personal and commercial projects on an ongoing basis without requiring additional payments each time you use that content. It's a win-win, and it's why everything on iStock is only available royalty-free — including all Angel images and footage.
What kinds of royalty-free files are available on iStock?
Royalty-free licenses are the best option for anyone who needs to use stock images commercially, which is why every file on iStock — whether it’s a photo, illustration or video clip — is only available royalty-free.
How can you use royalty-free images and video clips?
From social media ads to billboards, PowerPoint presentations to feature films, you're free to modify, resize and customize every asset on iStock — including all Angel images and footage — to fit your projects. With the exception of "Editorial use only" photos (which can only be used in editorial projects and can't be modified), the possibilities are limitless.