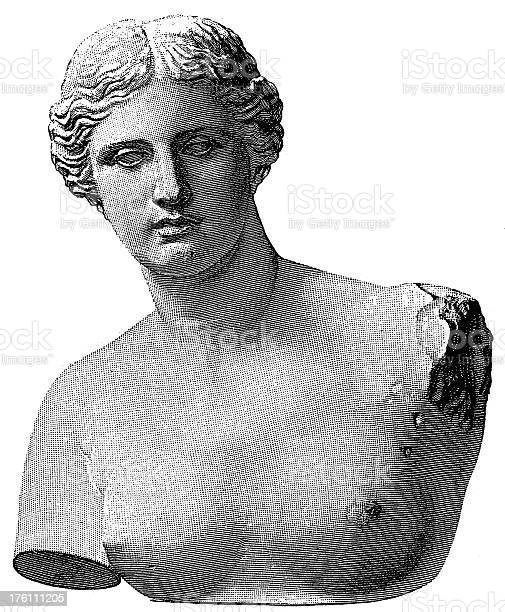 "Venus was a major Roman goddess principally associated with love, beauty and fertility, who played a key role in many Roman religious festivals and myths. From the third century BC, the increasing Hellenization of Roman upper classes identified her as the equivalent of the Greek goddess Aphrodite. In this way Venus was the consort of Vulcan. Virgil, in compliment to his patron Augustus and the gensJulia made Venus, whom Julius Caesar adopted as his protectress, the ancestor of the Roman people by way of its legendary founder Aeneas and his son Iulus.illustration was published in 1884 ""Encyclopedic dictionary""scan by Ivan Burmistrov"

What's a royalty-free license?
Royalty-free licenses let you pay once to use copyrighted images and video clips in personal and commercial projects on an ongoing basis without requiring additional payments each time you use that content. It's a win-win, and it's why everything on iStock is only available royalty-free — including all Statue images and footage.
What kinds of royalty-free files are available on iStock?
Royalty-free licenses are the best option for anyone who needs to use stock images commercially, which is why every file on iStock — whether it’s a photo, illustration or video clip — is only available royalty-free.
How can you use royalty-free images and video clips?
From social media ads to billboards, PowerPoint presentations to feature films, you're free to modify, resize and customize every asset on iStock — including all Statue images and footage — to fit your projects. With the exception of "Editorial use only" photos (which can only be used in editorial projects and can't be modified), the possibilities are limitless.